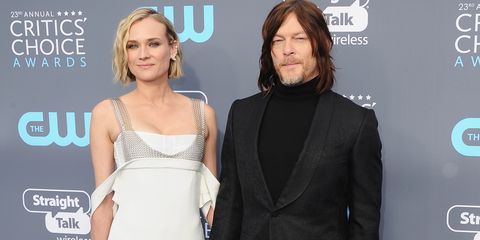 Diane Kruger is reportedly going to be a mom for the first time! Multiple sources confirmed to Us Weekly that the actress and her boyfriend, The Walking Dead's Norman Reedus, are expecting their first child together. The couple has yet to publicly confirm the news.

Page Six previously reported on pregnancy speculation surrounding Kruger earlier this month after she had abstained from alcohol at events this year and avoided figure-fitting outfits on the red carpet to hide the baby news.

For example, she channeled her inner Grecian goddess with this billowy number by Armani Prive at Cannes Film Festival.

Kruger, 41, and Reedus, 49, first met in 2015 while filming Sky. Rumors of their romance sparked up in February 2017, after the actress ended a 10-year relationship with Joshua Jackson in July 2016.

The couple just made their red carpet debut in January at the Golden Globes. Aside from the black-tie event, they've been spotted on a few public outings from apartment hunting in New York City to vacationing in Costa Rica.

Kruger previously said she's "over marriage" but is ready to enter motherhood. "No marriage for me. But I definitely want to have kids," she told InStyle in 2011.

She also joked that her role as a godmother has somewhat prepared her for having children of her own. "I have three goddaughters — I'm not sure why they trust me, because I have no experience with children — but I try," she said.

Congratulations to the parents-to-be!

To my sweetest, kindest Luna...Happy Birthday my love 😍 I’m so happy I get to be your Godmother ♥️♥️♥️