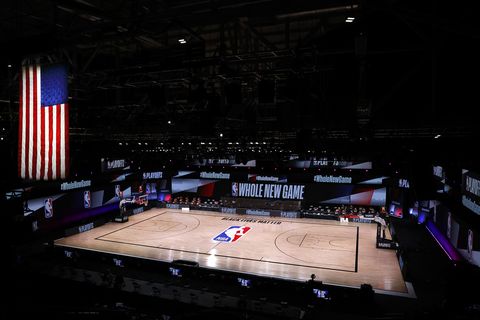 The strike is on.

After a police officer in Kenosha, Wisconsin, shot Jacob Blake, a 29-year-old Black man, in the back several times after he reportedly attempted to deescalate a fight, sports teams in his state are standing in solidarity with him and all the Black lives affected by police brutality. (Blake survived the shooting but is now paralyzed from the waist down).

Now, other teams and athletes are following suit.

The wildcat strikes—or strikes undertaken by workers without the authorization of a union's leadership—follows months of daily protests across the United States as the Black Lives Matter movement sparked anew following the police killing of George Floyd, a 46-year-old Black man who died after a Minneapolis police officer kneeled on his neck for several minutes.

On Wednesday, the NBA's Milwaukee Bucks did not leave their locker room for their game against the Orlando Magic. The team then released a statement explaining their absence.

"When we take the court and represent Milwaukee and Wisconsin, we are expected to play at a high level, give maximum effort, and hold each other accountable. We hold ourselves to that standard, and in this moment, we are demanding the same from our lawmakers and law enforcement," the statement read. "We are calling for justice for Jacob Blake and demand the officers be held accountable. For this to occur, it is imperative for the Wisconsin State Legislature to reconvene after months of inaction and take up meaningful measures to address issues of police accountability, brutality and criminal justice reform. We encourage all citizens to educate themselves, take peaceful and responsible action, and remember to vote on Nov. 3."

Afterward, the NBA announced that it would be postponing all three playoff games scheduled for that night, including the Houston Rockets vs. Oklahoma City Thunder and Los Angeles Lakers vs. Portland Trail Blazers.

The Mystics also each wore a white T-shirt with seven bullet holes on the back, to bring awareness to the number of times the Kenosha police officer fired rounds into Blake.

"We wanted everybody to feel like they were supported," the Mystics' Ariel Atkins said. "Understanding that this isn't just about basketball. We aren't just basketball players and just because we are basketball players, doesn't mean that's our only platform. We need to understand that when most of us go home, we still are Black, in the sense that our families matter."

Ariel Atkins with a powerful statement on the unified decision to not play tonight. #BlackLivesMatter

The Los Angeles Lakers and Clippers

In a players' meeting held last night, the two Los Angeles NBA teams reportedly voted to boycott the rest of the current NBA season. NBA journalist Shams Charania first reported that LeBron James walked out of the meeting after Miami Heat player Udonis Haslem asked how the NBA season could continue without the Lakers and Clippers. The remaining Laker and Clipper players followed James out of the meeting. James also reportedly expressed that he wants the owners to be more involved and take more action.

Talks between players continued through the following morning, reported the Los Angeles Times. The athletes eventually decided to resume the season, although Thursday's games will be postponed as details continue to be worked through.

The MLB team called off its home game against the Cincinnati Reds.

In a statement, the team said, "We need to pause and reflect on the events that are causing such pain and hardship to our local community and country."

A statement from the Milwaukee Brewers: pic.twitter.com/X9etvO3zIp

The team (with reportedly the most Black players of any MLB team) called off their game Wednesday night in solidarity with the Black Lives Matter movement.

The Dodgers and Giants released a joint statement on their respective Twitter accounts in regard to their postponed game.

"Throughout our country's history, sport has been a powerful vehicle towards change," the statement read. "The Dodgers and Giants proudly join our players in the shared goal for a more equitable and just society."

Last night, the Grand Slam–winning tennis player released a statement on her Twitter account explaining why she would not be playing her semifinals match the following day.

"Before I am a athlete, I am a black woman," she wrote. "And as a black woman, I feel as though there are much more important matters at hand that need immediate attention, rather than watching me play tennis. I don't expect anything drastic to happen with me not playing, but if I can get a conversation started in a majority white sport I consider that a step in the right direction."

Players from the MLS collectively decided against playing the remaining five matches scheduled for Wednesday, including Miami vs. Atlanta, Real Salt Lake vs. Los Angeles FC, San Jose vs. Portland, and Los Angeles Galaxy vs. Seattle. A statement from the league said the matches will be rescheduled.

We as players made the decision. Fix this, please give the right narrative. https://t.co/0Qhb8L7dMc

Chelsey Sanchez Assistant Social Media Editor Chelsey Sanchez is the Assistant Social Media Editor for HarpersBAZAAR.com, where she covers politics, social movements, and pop culture.
This content is created and maintained by a third party, and imported onto this page to help users provide their email addresses. You may be able to find more information about this and similar content at piano.io
Advertisement - Continue Reading Below
More From Black Lives Matter
How to Demand Justice for Breonna Taylor
How Naomi Osaka Is Honoring BLM at the US Open
Advertisement - Continue Reading Below
Jacob Blake Shares a Message from the Hospital
100 Days After the First George Floyd Protest
Jacob Blake's Sister: 'This Is Nothing New'
Breonna Taylor's Mom Remembers Her
Carrie Mae Weems Says “Take 6” to Fight COVID-19
The Long Tradition of Maternal Resistance
Today Marks Black Women’s Equal Pay Day
NYPD Pulls a BLM Protester into an Unmarked Van
午夜电影_免费高清视频|高清电视|高清电影_青苹果影院